NetBSD for newbies - Develop your own Power PC

So you may have few questions in your mind, indeed you're the one from millions who really knows the power of UNIX(or may be interested) like BSD Unix. Here today I'm trying to brief you about NetBSD. And how you can get stable working desktop on your laptop

YES this is what exactly you gonna achieve what you're looking in picture if you will follow step by step. 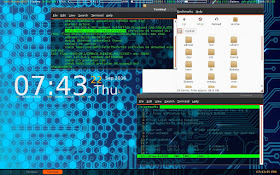 and after installation what you might need to do first is below.


Add the following line in your /root/.profile

Now you will be able to run this command pkg_add -v desiredpackagename without any error.

This is the main part and a bit complicated because we're going to fetch NetBSD stable source and recompiling and installing kernel.

NetBSD stable branches are a flavor of “Maintenance branches”. Please consult the Section 30.2, “Terminology”.
If you want to follow a stable branch, just pass the branch name to the cvs(1) -r option.
For example, if you want to fetch the most recent version of “netbsd-7”, you just need to use that tag:
And for the “xsrc” module:
If you have checked out sources from a stable branch in /usr/src and want to update them to get the latest security and bug fixes, run:
The same applies to the “xsrc” module, but in that case you will have to change your working directory to /usr/xsrc first.

When you've finished modifying the kernel configuration file (which we'll call MYKERNEL), you should issue the following command:
If MYKERNEL contains no errors, the config(1) program will create the necessary files for the compilation of the kernel, otherwise it will be necessary to correct the errors before running config(1) again.

Dependencies generation and kernel compilation is performed by the following commands:
It can happen that the compilation stops with errors; there can be a variety of reasons but the most common cause is an error in the configuration file which didn't get caught by config(1). Sometimes the failure is caused by a hardware problem (often faulty RAM chips): the compilation puts a higher stress on the system than most applications do. Another typical error is the following: option B, active, requires option A which is not active. A full compilation of the kernel can last from some minutes to several hours, depending on the hardware.
The result of a successful make command is the netbsd file in the compile directory, ready to be installed.


You need to install kernel after compiling it otherwise it wouldn't work.

Whichever method was used to produce the new kernel file, it must now be installed. The new kernel file should be copied to the root directory, after saving the previous version.
Customization can considerably reduce the kernel's size. In the following example netbsd.old is the install kernel and netbsd is the new kernel.
The new kernel is activated after rebooting:

If something went wrong

When the computer is restarted it can happen that the new kernel doesn't work as expected or even doesn't boot at all. Don't worry: if this happens, just reboot with the previously saved kernel and remove the new one (it is better to reboot “single user”):
This will give you back the working system you started with, and you can revise your custom kernel config file to resolve the problem. In general, it's wise to start with a GENERIC kernel first, and then make gradual changes.

Alright now all set Now proceed with packages installation. If you will enter uname -a command you will see 7-stable is running now.

Past the following files in exactly same directory location. Please remember each user will use it's on directory like if you create a user of your own choice you need to login with that user not root user. You can also configure the same GUI for root user but it's not recommended for security reasons.

If you missed any of above files you will not get desired look. And if you already done as up mentioned and still icons or theme is not working use obconf and lxappearance tools to adjust setting in GUI mode.

All mentioned files can be downloaded from HERE

After posting a link to the aforementioned NetBSD article in Reddit, a reader offered a solution in that forum (/r/NetBSD) on how to get audio working for YouTube. They said "as for audio on Firefox, it Just Works, but the default uses PulseAudio, which requires dbus running". They recommended these steps to get 'er done:

and control system audio with pavucontrol.

Thanks for reaching here and reading this article please comment below for any question.
Discuss Computer at 02:28
Share